From Twinsuniverse
Jump to: navigation, search

History of the project

Ever since its very first days, the Encyclopedia Twinsunica has been closely linked to the Magicball Network forums, as well as its predecessors. Ideas to create an entire compendium of both games existed ever since the beginning of the LBA community, in the late 1990's, and some members, like the legendary the Incredible WUK, have created some drafts of what will be in it (a mirror of which can be found here). In October 2000, The Magicball Network was created, and is to date the home of the Little Big Adventure community. A short time later, in December 2000, a sub-forum was created especially for the encyclopedia, under the given name "LBA compendium".

Although no real progress was made in the beginning, it was decided on the general shape of the encyclopedia; plans were to concentrate mainly on characters, locations and objects, and to make it look like the encyclopedia was written on Twinsun. Suggested outlines for the design of the site were made, although without concensus.

But very quickly, the enthusiasm has ceased. The forum became less and less active, and the project was almost completely abandoned. Except for a few posts here and there, it seemed that the interest in creating an encyclopedia was gone. One important thing did happen in this period: at around this time, the name, "Encyclopedia Twinsunica", was chosen; based, of course, on the Encyclopedia Britannica. 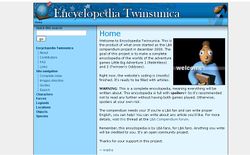 In June 2002, the forum member wacko has decided to take matters into his own hands. He created a database listing all items to appear in the database, as well as a rough outline for the articles. He then created the site which was to be the famous Twinsunica design for the next years, and registered an account on free.fr. In addition to the encyclopedia, a large image directory was created, with hundreds of images from the two games.

The enthusiasm was back. After wacko has created a thread with instructions on how to write the articles, the articles started rolling in. The main authors of that summer were morshem and Twinsal, with the assistance of a few others. Slowly but surely, the encyclopedia started filling up, and in a couple of months, about 50% of the articles were written.

But by the end of the summer, the project started fading out once again. People found less time and/or interest to work on the project, and the articles stopped coming. Except for a few articles here and there, no major progress was done. In November 2002, the forum member D'Sparil has joined the project, and soon became one of the more active writers. D'Sparil's articles were on a higher level than common then, and his writing has inspired a slight more activity in the project.

In summer 2003, the project became active once again. After a request of a few members, new moderators were assigned, and D'Sparil, Lightwing, morshem and Snapman were granted access to editing. This enabled updating of the database much more often, and new articles were added more quickly. At that summer, the main author was morshem, who wrote a few dozens of new articles to the encyclopedia. Additionally, a new feature, "related threads", was introduced, and the articles were filled up with a list of related forum threads about their subject, thus bringing the readers extra information. The beginning of the autumn brought with it a couple of new writers, and the future looked promissing.

But just then, when things started to look good, the site went down. It went back online a few days later, but the joy was too early. After a backup was made, the account went down completely, and was never active again. A few weeks later, the reason was revealed; apparently, FirePhoenix, who registered this account, has also registerd another free.fr account (for the Relentless Movie Project). Both accounts were shut down, and the Twinsunica was, once again, dead.

After a few months of dead silence, in December 2003 a mirror site was made, under the address http://www.cs.vu.nl/~bkarel/lba/ . However, the administration panel, through which articles were added and edited, was not available. So, basically, updating of the site was impossible. The members waited patiently, but wacko never found the time to fix it, and the site was left orphaned. Naturally, very few articles were made during this period, as it was hard to keep track of what there's still to write. As the site was not updated, enthusiasm to write new articles was quite low. Once again, it seemed that the project is about to decease.

In October 2005, more than two years after after the death of the old site, wacko has created a new site, using the well acclaimed MediaWiki engine, famous mostly for the Wikipedia site. The main idea of the engine is enabling absolutely everybody to edit and write anything. This implements very well what the project was intended to be from the very beginning: a community project.

However, work was not started right away. wacko wanted to try filling the database automatically with the articles from the old site, and thus no one edited anything in the new site. But once again, wacko found no time for that, and the wiki site was abandoned. In July 2006, morshem has decided to take control of the project. After receiving the permission of wacko, he started manually filling up the database, by copying and pasting the old articles, and while doing that redesigning a new style to better fit the wiki engine. After almost four months of work, the work was finally done. In November 2006, more than 3 years after the last known sign of life from the project, the Twinsunica finally came back to life.

Some of the tables in the mediawiki's database were completely empty after presumably an upgrade of the MySQL database server version that went wrong... [wacko may expand here]

As of Oktober 2012, the Twinsunica now continues as the Twinsuniverse, as different projects were merged.

The current state of the project

As of now, the Twinsuniverse is far from being completed. Many articles were written, but there is still a lot to be added or finished. You may consult the Current events page to see what there is to do.